22 streets and 4 train stations to visit in one day; in each of them, a stop at a pub to drink a beer or a shot. This is the crazy challenge of the Monopoly Pub Crawl, London edition.

Johnny from the London local Couchsurfing community organises such pub crawl every year in July and I have joined this year, on a pleasantly warm and sunny day. We were 5 of us when we started at 10.30 in the morning, and more joined us along the way. At the end we were about 25 people representing a myriad of nationalities from Europe and beyond.

Completing the challenge of visiting 2 pubs an hour, with travel from and to, requires a tight schedule and discipline: that leaves you in each pub with often just 10 minutes to order a drink and down it, and visit the restroom. I did my best to take photos and tick all the board’s squares, however have missed a few along the way!

In Old Kent Road, which is the farthest away from Central London, we visited a very old-fashioned and decrepit-looking pub called Lord Nelson. It was clearly in need of renovation, and indeed someone was there to re-paint, however at the time we visited he was drinking Guinness. 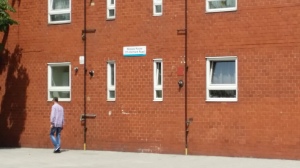 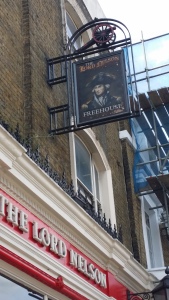 There are roadworks in Whitechapel road, where they are building a cyclist highway. The pub The Blind Beggar had a very nice garden, but it was still closed that early in the morning. We had to compensate later with an extra drink somewhere else to keep the counts. 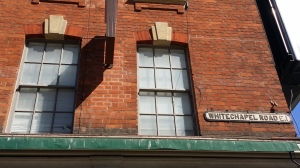 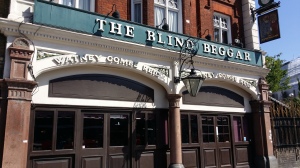 I joined this tourism experiment as unprepared as I sometimes travel, so had no idea what the actual Monopoly board looks like. As a result, I did not know that King’s Cross station – an non-exotic place to me who travel through it quite often – was one of the landmarks and therefore did not take a photo of it.

These three streets used to be light blues when the Monopoly was designed 75 years ago, however their status has much evolved since and, according to the Daily Mail, “if the property sites were redrawn at today’s values, we’d have Euston Road in the greens”. 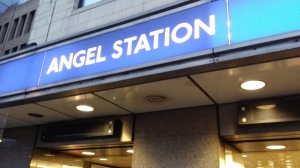 As a result, close to the Angel tube station there was no independent pub to visit and we had to get into a chain (All Bar One), and at Euston Road our target pub The Rocket had the most arrogant bouncer who refused entry to one of us who “looked tired” according to him, forcing the whole group to re-direct to an alternative pub.

Pub The Castle at Pentonville Road was interesting though, with giant maps of the world on the walls and a large and very drank family in a party mood.

This is Westminster, its official buildings and admiring tourists, where even the pubs are landmarks such as the Sherlock Holmes that we visited in Northumberland Avenue.

Pall Mall hosts more embassies and clubs than pubs, so we took refuge in a tiny side alley to get a beer at The Red Lion, a most stereotypical name for an English pub – but this one has a real red lion inside! 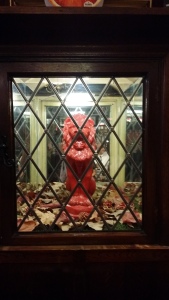 I have always found that pubs inside train stations are creepy, and the Victoria & Albert pub of Marylebone station was no exception. 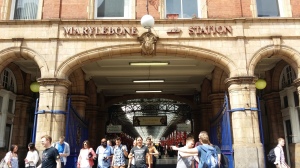 With this area of London, as crowded on a Saturday as ever, the pub crawl started to lose a bit of its charm to me. It was noisier, it was more hectic, and it was increasingly difficult to keep track with our schedule.

There was no prettier street on this tour than Fleet Street and Strand, with the narrow houses, timbered facades and wrought iron signs. 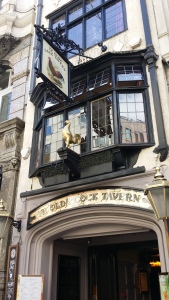 In a side street, close to Trafalgar Square, The Two Chairmen, a pub first established in 1683, had the most British interior and feel, in a 18th century old building. 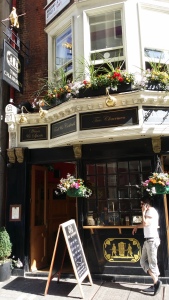 On a scale of creepiness, the pub inside Fenchurch Street station was far ahead of that of Marylebone station, with its decrepit carpet, gambling machines and TV screens. 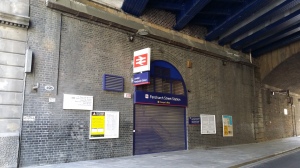 Its only highlight is that the station is on the Monopoly board, causing groups to visit on their Monopoly pub crawls. And indeed when we arrived there, another group of people, all wearing the Monopoly hat, were having shots of Sambuca.

Poor is the Eastern European girl who has no other job but serving shots in this second-rate pub.

Not at all my favourite area of London – one where the high influx of tourists is looked at with shiny dollars in the eyes, and where crowd equals cash.

A book was published last year in France (Industrie du tourisme, le mythe du laquais) that deplores how France, despite being number 1 destination worldwide in terms of number of tourists, does not turn it into such fruitful economical model as, for example, in London. Well, maybe it’s for the best. At least Paris has no area as commercially disgusting as Leicester Square. 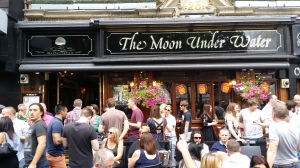 West End and the heretic shopping. I always wonder why tourists travel all the way to London to buy clothes made in Chinese forced labour camps and Bangladeshi sweat shops?

But Regent Street remains a nice place to walk and side James Street hosted us in a Lamb & Flag pub with the cutest blazon ever.

This is one of the most beautiful buildings with its delicate lacework-styled roof, and very typical of the area with the mixture of materials from the past and the present.

The area of the expensive hotels overlooking Hyde Park, and a couple of pretty English pubs. 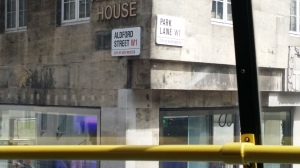 This has been a very long day, with 26 drinks and, according to my friend Marc who was using the Endomondo app:

This post is my contribution to Kama’s Monthly Travel Challenge for July. The briefing this month was visit a yearly event that is held only in July only – and luckily this one is only once a year!

6 thoughts on “Experimental tourism: a Monopoly Pub Crawl in London”